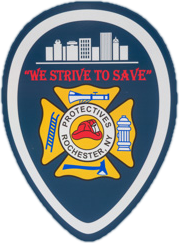 " We Strive To Save"

History of the Protectives Co.1

The Protectives was formed on August 23, 1858, by an act of the Rochester City Council at the behest of 51 of the young City’s most prominent merchants and businessmen. Their formation was part of a general “reorganization” of the Rochester Fire Department, which at the time consisted of ten separate fire companies which had taken to fighting more with each other at fire incidents than against their common enemy, fire. There had been criticism of the Department’s efforts at the Minerva Block fire earlier that month, but several nights later various fire companies directed almost all of their efforts and energy towards brawling with one another while the “Break O’Day House” burned to the ground. The Mayor, City Council and the leading citizens of Rochester had had enough of the oftentimes drunken brawling and the lack of coordinated leadership within the fire organization at fires and in general. They wished to better protect the property of the merchants and citizens, not just from fire and water, but also from the firemen themselves.

There was stiff opposition from some of the more rouge fire companies, in fact on at least one occasion an officer of the law was directed to man a firehouse with his revolver in hand in order to effect the changes sought by City Council. City Council persevered. Council had been authorized to pay for (and thereby control) a “Property Protection Brigade” as part of the Fire Department’s reorganization. Thus was born the Protectives Property Protection and Salvage Company.

The City provided their rapidly growing membership with covers, sacks, buckets and tools as well as a hand draw cart with which to carry them. They were also supplied with suitable quarters in the form of a house located on Mill Street, below the Corinthian Hall in what then was the “entertainment district” of the City, right next door to Rattlesnake Pete’s Museum. From their inception, the Protectives have honored their responsibilities to the community and to the Fire Department. As the City and the Department grew, so did the Protectives. The organization, needing more space for members and equipment, soon moved their headquarters down the street to Mill and Market Sts. However, by 1881 it was apparent that yet another move to even larger quarters would be in order. In addition, the Protectives wagon was still hand drawn, and it was becoming increasingly obvious that an improvement in this area was needed in order to transport their equipment throughout the rapidly growing community.

In May of 1882, the Protectives moved into a newly erected structure on North Fitzhugh St. The new quarters had been custom built and furnished with partial funding from the membership and the business community. However, the bulk of the construction expense was borne by the citizens of Rochester through appropriations from City Council. It gave the Protectives greater comfort and space for their brand new “Patrol Wagon,” which the City provided complete with a team of horses and a pair of paid Fire Department drivers.After the Great Sibley Fire in February of 1904 (with a fire loss at the time of $4million), the City of Rochester recognized a glaring need to modernize and upgrade its firefighting capabilities and became a front runner in utilizing innovative equipment and methods thought to better control and prevent fires.

Not to be left behind in the push for modernization, the Protectives in 1915 received their first motorized vehicle with drivers, again provided by the City. In the meantime, the Protectives’ quarters had moved in 1906 to the new Fire Department Headquarters on the corner of Central Ave. and Front St., and again in 1937, when the Fire Department Headquarters were relocated to an even larger complex of municipal buildings at North St. and University Ave., the Protectives were given a more spacious and centralized location there. This remains the home of the Protectives today. The tradition of selfless dedication lives on in its volunteers who aid and assist the rank and file of our Fire Department. They are proud members of what is by now the longest standing volunteer department ever to serve the City of Rochester, for a period at this date of over 144 years! Millions of dollars of property and valuables have been safeguarded during this time at very little expense to the community. The community has greatly benefited from its association with The Protectives and so has the Fire Department.

They sometimes may take for granted the services which we provide for the Fire Department and the citizens of Rochester. Initiating salvage, setting up and operating fans and lighting at incidents and pumping out flooded basements are all jobs to which Firefighters and Citizens pay little attention, but they would be sorely missed if The Protectives weren’t there to perform them for the Rochester Fire Dept. and the community. Of course, this is no revelation to many of the rank and file of the Rochester Fire Department, however, because many Rochester firefighters originated from the rank and file of The Protectives and they still subscribe to the motto, “We strive to save.”